Or should I say total marketing blunder? First of all, everyone knows in business that you keep your public discussion about your industry and competition positive. The public, even your fans, are turned off by your negativity about other companies.

Nike really screwed the pooch on this one. Their Facebook post seemed innocuous enough: “FACT: Friends don’t let friends wear shoes with five toes” it read. No big deal, right? They’re just having a little fun with a trend that has captivated the running world, right? Those five-toe running shoes are kinda goofy, right? Haha, everyone?

Oops. It turns out a vast chunk of Nike’s audience have tried the toe-shoes and like them, or have seen them, or at least respect the attempt at innovation and industry leadership. Vibram, Merrell, Fila and a couple of other companies are making these weird-looking shoes for ‘barefoot’ running. And apparently Nike has not caught on. Maybe it’s because of a patent, or they think it’s a passing fad, or their internal scientists really feel that these shoes are sub-par, unsafe, uncomfortable, or offer inferior performance. I could understand that.

But this petty little post on Facebook doesn’t have much science behind it, besides psychology. It’s a little like watching a jealous high-school cheerleader gripe about the new popular girl. After a long string of posts that make complete sense for a global brand selling stylish performance apparel, suddenly the company attacks a proven and validated technology.

It’s About The Brand, Not The Shoes

I’ve seen these shoes in action on the hiking trail. Apparently they are better for the feet, as well as for a hiker’s or runner’s ankles and legs. It may be a different thing to run in them than the sneakers we are used to, but it represents a performance enhancement that has definitely caught on. It reminds me of the deep-cut parabolic skis. I thought they were a fad a few years ago, and was among the last to buy a pair. Today I can’t imagine life without them.

Maybe these five-toed running shoes will be a flash in the pan, or maybe they will become the thing we can’t imagine not having in a few years. Either way, that is not why Nike has made a mistake. These shoes right now represent innovation, something that is constantly in demand in the running world and in all of sports. Nike often claims to represent the latest in athletic shoe technology, and it’s difficult to imagine a serious manufacturer belittling a clear advancement in its industry, no matter who created it.

This isn’t like Coke versus Pepsi. It’s more like if a maker of electric guitars bashed a company that makes acoustic guitars. Many of the most avid fans will try other manufacturers’ products and probably respect and own some. These are people who take running seriously. The focus on style may work for the fashionistas, but the serious runners aren’t concerned about that. For a company that just wants high school kids to wear their gear because it looks cool, this Facebook post was a smart move; but for a company that is trying to appeal to serious runners, it was a mistake.

And It’s About The Fans 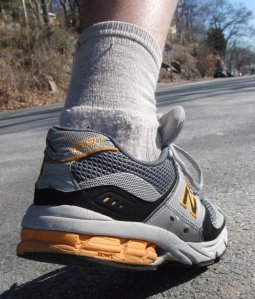 Some of the Nike-defenders on Facebook have asked “So why did you like Nike’s page?” Well, it’s because these are serious running fans who own Nike products. It isn’t as if Dick Morris’ followers ‘Liked’ Michael Moore’s page so they could post on Mike’s wall and bash his followers directly. Nike’s followers on Facebook are actually interested in the company and its products, but they also favor gear from other companies, and this childish behavior from Nike will rub most of them the wrong way.

I myself follow (Like) the company’s Facebook page, and that’s how I saw this catty little status update. I own a pair of Nike running shoes, but I prefer my New Balance and Asics runners and when I hike, I wear Merrell. I probably follow or ‘Like’ those companies too (seriously, I don’t really know without looking), and if one of them did this I wouldn’t be a fanboy; I would be embarrassed and ashamed.

Maybe It’s Brilliant, (But Probably Not)

The majority of commenters are highly against what Nike has done, and this will be seen as a mistake by the company. In fact, I wouldn’t be surprised if they were developing a similar product right now. If this update is simply part of an elaborate reverse-pshychology marketing campaign, this may be the beginning of one of the most clever and elaborate buzz-building schemes in the history of online marketing.

Let’s see what chapter two will bring. For now, Nike stands with egg on its face.