A Bluebird Day on Mount Kinsman 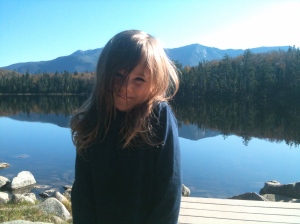 “You can see an ant on Lafayette,” said a hiker the next car. It seemed possible to see something the size of a cat on the summit, if not an ant, from the Lafayette Campground parking area. That’s how clear the sky was. Perfect.

Riley and I arrived around 8:30AM to climb Mount Kinsman. Though I’d reached Lonesome Lake before, The Fishin’ Jimmy Trail and the Kinsmans were new to me. 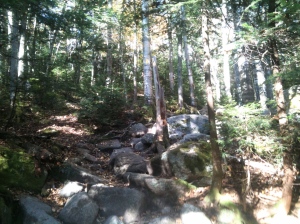 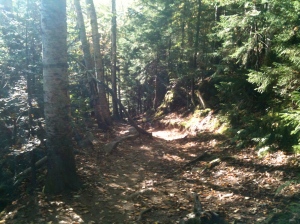 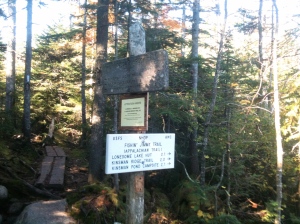 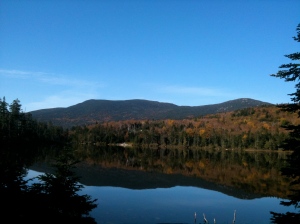 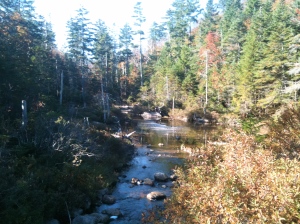 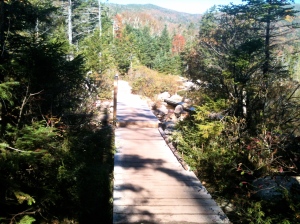 I was on Cannon over a year before, and I’d forgotten how much I like the terrain in that section of the Whites. The Kinsmans have a gorgeous mix of colorful terrain and flora. The rocks and ledges are mostly coarse-grained (which matters because the trails include a lot of sloping ledge) and speckled grey and white. The forest is a little more open than elsewhere, and not as thick with undergrowth, so the effect is a lighter, sunnier forest.

It took about an hour to reach the lake and the Lonesome Lake Hut. We tanked up, visited Clivus, and headed on up the Fishin’ Jimmy Trail. This is considered one of the more annoying trails to hike, but I find if you have a good map with tight contours, you know what’s coming. 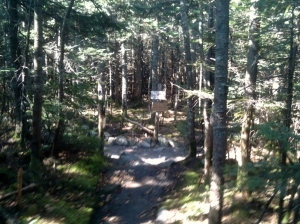 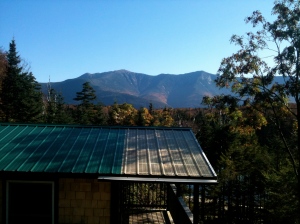 In the first mile I saw a ridge crossing, a drop to roughly the same contour as the hut, and then three steep pitches, each climbing about 200′, separated by flat spots. Then you reach Kinsman Junction. Simple. 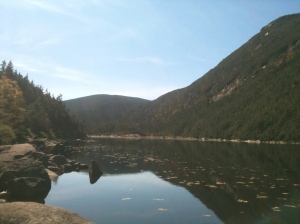 All of the mountains have a very different type of rock, soil, and forest. Sometimes you can tell something has changed when you cross from one massif to another, such as when hiking from Zealand to Guyot. Nobody would confuse the Unknown Pond Trail with the Dry River or Cedar Brook trails. If you blindfold a hiker experienced in the Whites and put them on a random trail, they could probably identify the mountain and elevation. 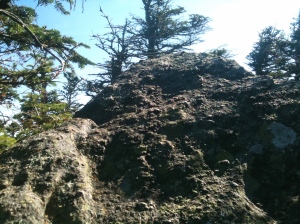 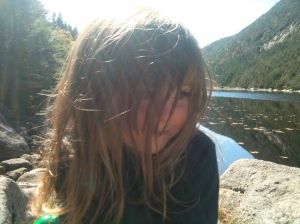 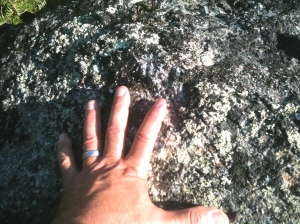 We sat at Kinsman pond enjoying our snacks and the echo for awhile. I don’t know exactly how the tentsite platforms work with stakes. My tent requires stakes to work correctly, so I remain anxious about ever using the platforms. 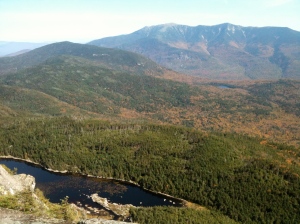 We moved on up the Kinsman Ridge Trail to the north peak. I saw a large boulder that looked higher than anything nearby, and scaled it. I don’t know if peakbagging requires one to touch the top of the highest possible rock with an ungloved hand while getting a photo and whistling Fanfare For The Common Man, but I just like to be sure.

The ledge viewpoints on North Kinsman are phenomenal, rivaling Osceola and Zeacliff in exposure and range. You look out over the broad plateau above Franconia Notch, with Kinsman Pond in the foreground, Lonesome Lake in the middle distance and the Franconias forming a backdrop. Unreal. 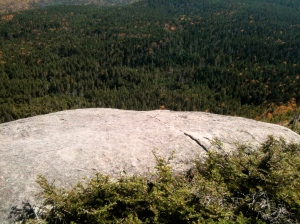 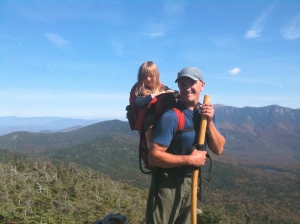 Maybe it’s the logging history of the area that defines the look of its forest today. I’m guessing here. I don’t actually mind seeing logging tracts, and I know there’s some windfarm discussions going on these days as well, but even those, like logging, represent commerce, production, jobs, and can be practiced in a sustainable way. I do have a problem with housing developments, which produce nothing and only create jobs for one season. Once somebody clears a hillside to build their ridge yachts, it’s a pointless eyesore forever. I don’t care how rich you are, you can live in the valleys. 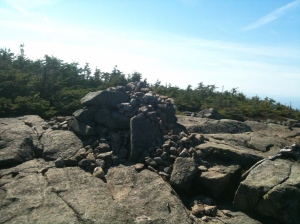 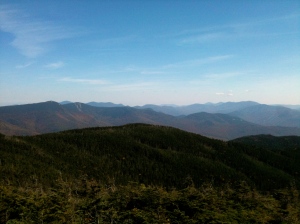 We reached South Peak after an easy mile, taking the spur to the north knob and then moving to the south knob with the cairn. It’s funny how both of these knobs look higher from the other. West Bond offers this illusion as well, which is probably why that trail’s end is clearly marked with rock walls.

On South Kinsman, the mountain’s only flaw is revealed; the 360 degree view looks out over flatland on the west, creating the Toronto Effect. This is when you reach a high viewpoint only to discover there’s nothing to see (named for the effect on visitors to Toronto’s CN Tower). Thankfully, the Kinsmans more than make up for this with a view east that reaches from Moosilauke to Chocorua. 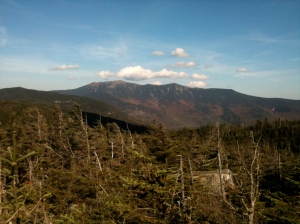 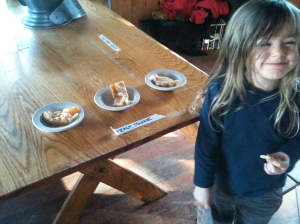 We idled for over an hour on the peak, then finally headed back to the car. We crushed book on the way down, reaching the hut (where we stopped for some peach squares) in two hours and the car in another 30 minutes. 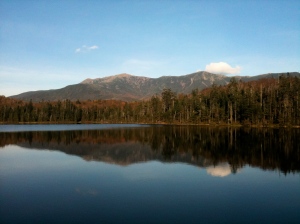 One day I will have to address the kids hiking vs. riding in the pack. Next year they will weigh more than 40 lbs., so carrying them with water, food, essentials, and clothing (and overnight gear) will be close to impossible.

When they hike, which of course is the point of this activity, we move slowly and pick up a lot of sticks, rocks and leaves. For a preschooler, playing with stones and dirt beats the heck out of hiking for miles, so we sing and play follow the leader a lot. Eventually they ask to ride, sometimes after detecting an uphill segment (which they’ve become pretty good at). 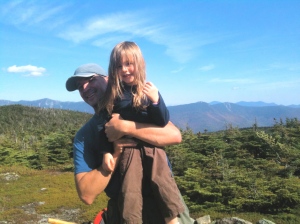 I can still crush book on the hike if they ride in the pack, but we also spend a lot of time putting the pack down, getting water and snacks, playing with leaves, calling echoes, throwing rocks into streams. They’re also very good at falling short of whatever milestone I’ve imagined we could reach.

Of course, none of the details matter in the end. I have a lot of fun hiking with the kids, and I know they love it (so far). Someday they’ll hike on their own, and I hope they’ll remember the trips we took to these summits. Maybe someday they’ll be the ones waiting for me to keep up.