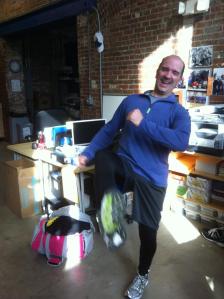 The Boston Marathon is less than five weeks away.

Normally that wouldn’t bother me at all, but this year is a little different. This time I’m supposed to run in it.

It’s 26 miles. 26.2 actually, as any marathoner will probably point out. I’ve run 5 miles. Even 10. But that’s always been my limit. I don’t think it was physical as much as mental. Running 10 miles takes an hour and a half. That could be a movie. Instead, I’ve chosen to spend that time pounding my legs into pavement listening to an iPhone shuffle playlist that is short enough to call up Barry Manilow twice.

And now I’ve signed on to run more than twice that distance. No iPhone allowed.

But I have learned some things. First, I’ve learned that a die-hard skier can actually shift priorities. This was probably the mildest winter I can remember in awhile. As a lifelong skier, I’m sure feeling a bit torn about my good luck with the weather. If there was ever a winter to keep the skis in the cellar and train for a marathon instead, this was it.

I’ve already been telling people this was my plan all along, because I knew, (yes, KNEW) this was going to be a warm, dry winter with the roads clear of slush and sand and the temperature a balmy 20 degrees for my 5AM runs.

I learned to be cavalier about injuries. Is that a bone spur? Is that an IT band? Is that tendinitis? Did I just jam an ankle doing something really stupid at the playground with the kids? Let’s run it out. Let’s put in 3 miles and see if it goes away. I have to put 22 miles on this ankle tomorrow.

I learned about ice.

Speaking of that, for the first time in my life, I’ve learned what it felt like to be unconsolably cold. A long run takes so much out of you that I now have this unnerving need to bundle up right afterward and just be warm. Now. This is a concern because I always want to be a northerner, but I think it’s because endurance training draws down every ounce of energy I have.

About that, I knew my legs and ankles would feel it, and I knew my mind would be tested. I wasn’t ready for the gastrointestinal issues associated with distance running but that’s now under control.

I’ve learned that my heart and lungs actually work really well during a run even though I’m slightly asthmatic. In fact, I’ve become annoyed that I can’t get my heart rate up anymore during regular exercise.

The biggest energy effect I wasn’t ready for? The crushing stupidity. After three hours running the road, I’m a much bigger moron than usual. Alcohol wears off in a day, and I assume other popular imbibed and inhaled substances wear off overnight. But running 20 miles puts me in a should-not-drive-should-not-use-scissors-should-not-be-put-in-charge-of-children stupor that can linger for days.

I learned that runners see a lot of sunrises from the road. More than that, after a year of hiking and running, I’ve become far more claustrophobic. I can’t stand being indoors. But I consider this a happy discovery.

I’ve learned that it’s possible to raise ridiculous amounts of money from friends and family, but it’s hard for someone like me who hates asking. You have to. You just do. And many amazing people will come through for you and the Playworks cause.

Most importantly, I’ve learned that I can do this.