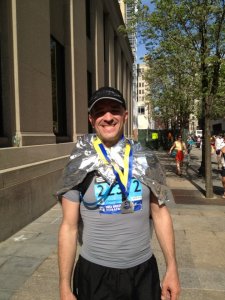 So… the 2012 Boston Marathon was epic. I heard that more than 4,000 runners took the BAA up on their offer to defer until next year. These are probably fast runners who wanted to go for PRs (personal records). Smart folks. Another 2,000 or so did require medical help of some kind, and they included elite and expert runners.

The BAA warning before the race was pointed: If you had never run a marathon or had not run in these conditions, they recommended you bag. I realized if I ran in the 88 degree heat, next time that warning wouldn’t mean me!

So the moral of my story: I got greedy.

Inexperience told me to add a half-minute to my planned 8.5 pace. Ha! More like two minutes. The BAA warning mentioned adding two minutes per mile, too. If I was realistic, I should have targeted a 10 minute pace, and maybe the plan would work out for 4:20. Maybe. That was the best I could have hoped for. In reality, I ran it in 4:38:03, and I consider the 18 minute extra time to be my punishment, and I’ll take it. The weather was a huge deal for everyone, even for the winner. The word of the day was ‘Brutal’.

At some places there were bands playing on trucks or on a lawn. A blues outfit, a bluegrass band, a horn ensemble, and some drum circles. There were some funny signs that I can’t remember. One spectator wore a shirt that read, “Running Sucks”. I was running in pace with a bandit crew from BC (unregistered runners). They got big cheers from their crowd when we reached the school.

I didn’t see any people fall, but I did see runners resting in the shade, being helped by police and volunteers. The volunteers were exceptional. So much work goes into this thing that a staggering number of volunteers are needed. And they get a cool jacket. Orange this year.

I started feeling cramps after the hills. There are four miles on Beacon Street that deserve mention. By this point you want it over. The crowd is loudest here, and tend to yell stuff like “Four miles left! Almost there!” And you feel like you have to oblige.

They really do provide a boost, but at this point swerving over to the edge to high five and whoop back with them uses precious energy. Of course that didn’t stop me. I knew this stretch would be my nemesis, so anything to have fun. One group had a sign for someone named Skip, so I started skipping, and a couple other runners joined me. There was a percussion group banging away, so I gave them a taste of my weird brand of step dancing. More cramps.

At the end, some runners spread their arms wide and ‘flew’ serpentine toward the finish, I didn’t do this, but I did run that last mile. I ran the entire Kenmore stretch (this is where you get seen on the news, doncha know), and just ran through the cramps. Probably stupid, but it’s in the books now, and we’re uninjured.