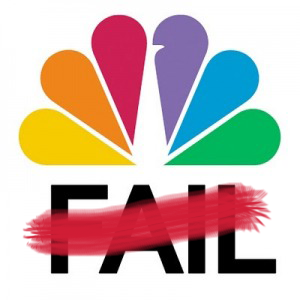 I have to admit, I haven’t really had much of a problem with NBC’s coverage of the 2012 Olympic Games in London. But I got clued into this #NBCfail phenomenon on Twitter a few days after the opening ceremonies. Apparently this guy, named Guy Adams, a reporter for an independent paper called, creatively enough, the Independent (did George Lucas name the players in this saga?) was so incensed about NBC’s delaying the opening ceremonies that he tweeted continuously about it.

This dude- sorry, I mean Guy, got suspended from Twitter because of a complaint from NBC, and the firestorm was on. Whether Twitter or NBC were wrong to do so is not my topic here. To me, it seems to be Twitter’s fail, not NBC’s. This is about Guy’s complaint (and the complaint of many others) about broadcast delays in the first place.

Now, I’m not one to come to the aid and support of a large company, especially a media company. But getting all irritated because the network waited until you got home from work, got your dinner, grabbed a brew, and put your feet up on the recliner, before showing you a parade of athletes dressed in their nation’s propagandish garb, seems a little obsessive to me. Basically, if Switzerland’s team walked by at 2PM, and people on the west coast of the US didn’t see it until 8PM, so what?

Apparently there’s this notion that the world “shares the experience” better if some of us have to stream it into our cubicle at 10AM, or in the past when the Olympic games were played even further from the western world, at 3AM or something like that.

In this day and age, nothing is live. David Letterman’s monologues are three days old before they air. Big Brother was recorded months before you see it. A movie takes two years to make before it opens, the news is recorded a few hours before airing, and even Saturday Night Live isn’t very much live anymore. Sports events are delayed to make room for easily-scheduled advertisements, and everything you hear on television or radio is at least seven seconds behind real-time, to make sure nobody gets to hear the word “fuck” when the DJ kneecaps himself on the desk.

So now here’s NBC doing what they do best; packaging opening ceremony programming into neat little ad-supported bundles of feel-good milquetoast vignettes, and Guy Adams is calling for revolution.

What’s the point of live television anyway? I guess sports should be as close to live as possible, for the singular reason that people gamble on the outcome, and if some know the outcome before others it gives them an unfair advantage. So did Guy Adams have money riding on whether Switzerland would wear blue hats or red ones as they marched across the field in the opener? I can’t think of another reason for sports to be live, and gambling is illegal where I live anyway (I think). So why would I care if the sports are live?

I guess if I cared whether Michael Phelps beat the other dude (there is supposed to be some kind of rivalry going on I’ve heard), I’d want to see it. But why should that change just because I know the outcome? I know when the New England Patriots play, and I know the outcome before watching the DVR recording, it just makes it easier to watch. And if the beef is that NBC keeps showing advertising and human interest crap, then use your DVR to delay the programming just a little longer, and skip that stuff, too! Beat them at their own game.

Lifehacker even provides a way to get around NBC using the web.

Now, why exactly have I had no problem with NBC’s Olympic coverage? Because I haven’t seen a minute of it. I’ve been watching this (not live, sorry):

Personally, I have waited about 40 years to see an Olympic games, including the opening ceremony, so I think another 6 hours won’t hurt.