Weekly? We’re calling it weekly? But it’s once a year, right? Well, yes, strictly speaking, we only publish our weekly update once a year, but it’s coming out during a week, so what’s the problem? Got ya there.

So what went down this year? Let’s start with Connor. This sharp little guy is in his second year of school and is kicking serious butt. The words are really starting to flow, too, as people who don’t know him are starting to understand his speech. That’s huge.

He’s also a mountaineer. He climbed the entire Flume Slide Trail in NH and has also hung bear bags, built mound fires and can dig and use a cathole. Okay, Daddy helped.

Oh, he runs. And swims. Unassisted. When the training wheels come off in the spring we’ll have a triathlete. 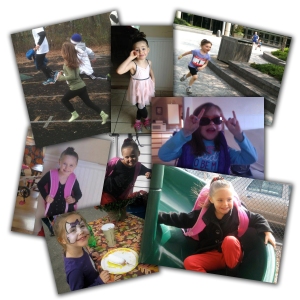 Now to Riley. She’s finally in school, too. And is by all accounts excelling. She’s also quite the hiker, accompanying Daddy for a traverse of Baxter State Park. She saw a wild moose up close and hung a bear bag, which Daddy subsequently lost.

This summer she stood on the summits of the northern Presidentials and the Franconia range. Quite the year.

Rye was in her first dance recital this year, in a tap performance dressed as a bumblebee. Now she’s working on a much harder hiphop routine and nailing it. She’s also a runner, and even met Bill Rodgers at a race. She’s also an unassisted swimmer, with a freestyle and breaststroke.

Now Tom. No, we really mean, “Now Tom… let’s see if you can keep the false modesty from showing.” Well, how can we say this? Tom is 40; the age when you look at the road ahead and it’s not pretty – crumbling, increasingly pocked with potholes, and all downhill.

So Tom ran three marathons, including Boston, where he raised $4500 for Team playworks. He also ran four halves and got down to 163 lbs. Paul Ryan territory.

If you ever ask him about autumn 2012, he’ll tell you how he ran 9 miles one Friday, hiked the Franconia range the next day with Rye on his back, ran 20 miles the next day, ran a 90 minute half marathon 6 days later, a 3:32 marathon a week after that, and a 96 minute half 6 days after that. And another marathon a month later.

So Tom is stupid.

Now Lisa, on the other hand, has been doing all the real work, and carrying the torch for the kids, and has taken on a few new responsibilities with the school system. She has become co-chair of the Lynn PAC, which works with the special needs department. The PAC is newly energized and stands to get a lot done. It even has a new website.

Lisa has also taken up Yoga and impressionist painting… Okay, no.

But she did create her own confectionary company to help with Tom’s fundraising. Where will she go with this? Tune in tomorrow…

So that’s our year. We wish you a happy holiday season and all the joy, peace, and love it brings. Unless you’re Mitt Romney; We’ll be laughing about your humiliation for the next 30 years. You know what they say about payback?