I’ve been on the summit of Cadillac Mountain in Maine’s Acadia National Park. I even hiked it. It’s just over four miles up and back.

I’ve also been to Washington, DC, and did plenty of walking around. Probably 3 whole miles.

What I’ve never done is run the 700+ miles between these two places. If I were to try, I’d give myself a few months, maybe a year.

Gary Allen will run that whole distance in two weeks. Starting on January 7, he will leave the summit of Cadillac Mountain at 6AM. He will cover 50 miles a day, until reaching Washington, DC just in time for the Presidential inauguration on the 21st.

Well, maybe for you and I, but Gary has run 86 marathons, including Boston and NYC dozens of times, and 5 ultra marathons. He’s also fast. He ran 65 of those marathons in under three hours.

Do the math. He can cover 50 miles in 6 hours at that pace. That’s like getting on a treadmill at 8 in the morning and knocking off at 2PM. Nothing to it. Even if he ‘relaxes’ at a pace that would still grind most of us into paste, he can take 10 hours and still have time to write to fans.

Why, you’re wondering, would someone do this? 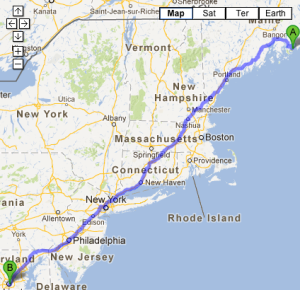 Well, for charity. Gary is running to raise money for the Wounded Warrior Project, which helps injured service members transition to civilian life, and the American Cancer Society.

After the December shooting at the Sandy Hook Elementary School in Connecticut, he added the Sandy Hook PTSA to the list. The funds will be used for counseling, funeral expenses, a scholarship fund for the school’s students and a memorial.

It’s all done using CrowdRise, so the money is going directly to these organizations. To follow Gary as he runs to support these charities, go to his Facebook page.

I doubt I could keep pace with Gary, but he has welcomed runners to join him along the route. You can see that here.

1 thought on “What Real Running Looks Like: 700 Miles For A Cause”